Tapestry must be one of the most intimate of all art forms and Hannah Ryggen, one of its most intimate of exponents. Born in Malmo in 1894 she settled into subsistence farming in Norway with her painter husband, Hans. Although trained as a painter in oils she turned to tapestry becoming closer to the rural farming class. From these earthly roots and reading of Dagbladet , the culturally radical journal, she produced works to represent some of the most profound events of the twentieth century.

Her works are currently on display at the Oxford Museum of Modern Art.* The show opens with a triptych narrative of her farming life, We and our Animals (1934), appearing three times feeding their hens, cattle and in a domestic setting. The pace quickens with the brilliant anti-fascist Ethiopia (1937) shown at the same World Fair alongside Picasso’s Guernica in 1937; her depiction of, the speared, Mussolini was censored out. The exhibition has two highly critical tapestries of Norway’s Second World War position and objections to its role in nuclear armament and NATO, the anti Nazi  6th October 1942 (1943) and Jul Kvale (1956). There are more powerful statements on nuclear war and a very clever attack on the USA’s involvement in Vietnam depicting Lyndon Johnson’s casual cruelty to his pet dog.

Interspersed with her political comment are some beautiful works of a more personal flavour. She appears in A Free One (1948), a statement of the eniquity of wealth and poverty, and one of her late works, Fishing in a sea of debt (1956). Her themes of personal love are coloured with rich reds, where in her words ‘she lets loose with explosive effect’. 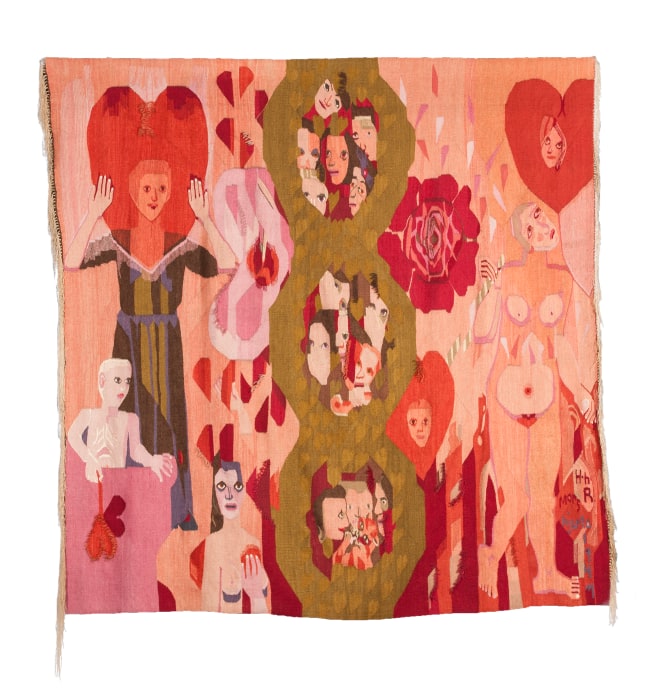 What gives Ryggen’s tapestry’s such intimate power is her involvement with the whole process from spinning the yarn from local wool, dyeing with colour from the immediate countryside and manufacture on a hand made loom in her farmhouse kitchen. The exhibition is completed with a very personal 30 minute film with Ryggen explaining her philosophy and describing various tapestries.

*Unfortunately the exhibition closes at Oxford on Sunday.