My final post from our France trip is Bourges Cathedral, dedicated to St Etienne (St Stephen), situated to the south of Paris, some 120 miles away from Chartres. It offers some interesting aspects, architecturally, most notably not having any transepts, unusual in a gothic edifice. Firstly, there are two aisles either side of the nave, which travel all around the east end as two ambulatories. There are therefore five portals at the west facade instead of three. The heights of the nave and aisles are 121 ft, 70 ft, and 30 ft giving the building a triangular cross section. This configuration, together with the slender flying buttresses allowing much more light in, compared to say, Notre Dame in Paris, which seems so dark in comparison.

West Facade of Bourges Cathedral with five (refurbished) portals, the central one representing the last judgement and the right hand side, the life of St Etienne.

The second interesting aspect of Bourges is its being relatively unscathed from the French religious wars and the great twentieth century conflicts, which damaged so many Cathedrals further north. This results in what you see being mainly what has stood since the thirteenth century. The current building was commenced around 1190 and mainly completed by 1260, although not consecrated until 1324. 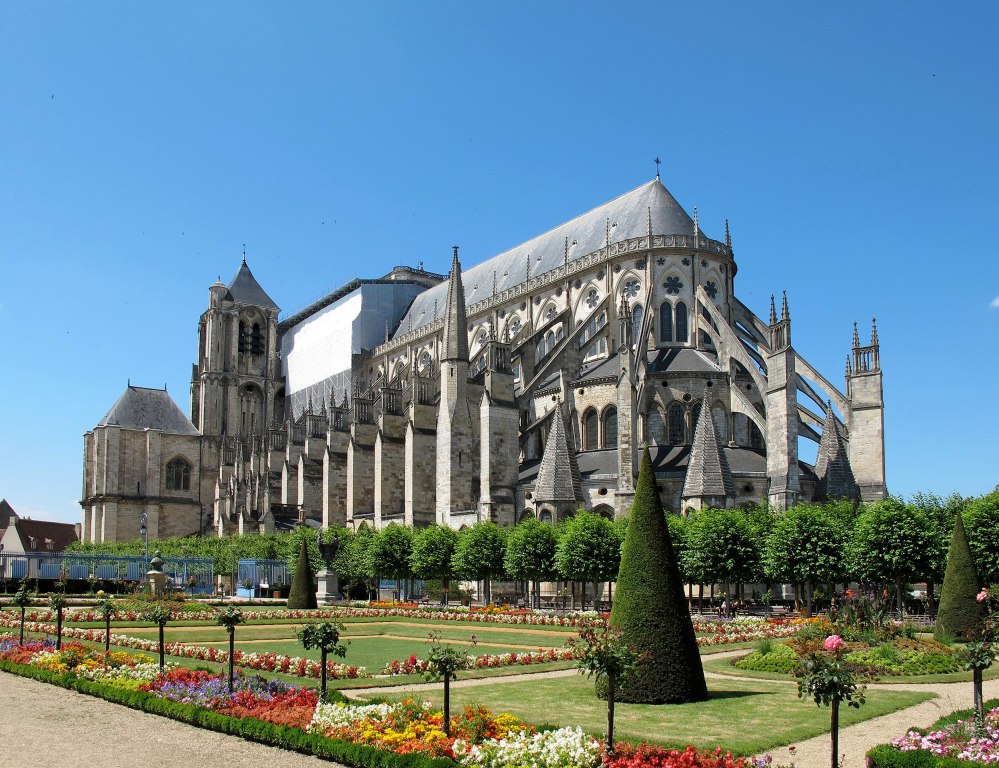 Bourges Cathedral with obligatory scaffold. Note the receding rooves of the aisles allowing so much light into the nave.

The third area of art to note is the stained glass at the east end. The majority of the windows have the original glass dating from 1215, around the same time as Chartres and Canterbury. There are typological windows (where the Old Testament foretells the New Testament) similar to Canterbury and various hagiographical programmes (telling the life of saints). Being a great enthusiast for medieval church glass this was a fabulous surprise and treat, especially as, unlike Chartres and Canterbury, you can very nearly enjoy it to yourself (Millionaire’s tourism)

Bourges is not really on the tourist trail and the town, quite quiet, but if you do go, you will be very well rewarded.