I handed in my final essay this week which is a great relief. Having enjoyed the architecture of Frank Lloyd Wright* and the sculptural beauty of Barbara Hepworth I think I need a little time with some two dimensional art. And what better place than Southampton. Just a few minutes from the station is the civic and cultural centre with its City Art Gallery, Sea City Museum and Solent University’s John Hansard Gallery.

The City Art Gallery first. Bridget on the course recommended the Gallery, maybe because she lives here. The main gallery is on the first floor, a long room with a very eclectic mix of mainly nineteenth and twentieth century paintings. There are the Camden Town Group here, the London Group, Graham Sutherland and some interesting work from Cornwall, together with some very fine small bronzes by Epstein, Rodin and Degas. All in all, I thought that was a quaint little provincial collection – where next?

But then I ventured into the side galleries. An early Italian room houses a superb altarpiece by Allegretto Nuzi (1315-1373), and there is an intriguing room with a series of gouache preparatory paintings on the subject of Perseus by Edward Burne Jones (1875-1885). The final work, commissioned by the Prime Minister, Balfour, was never completed so these preparatory paintings are the only full series. It is the story of Perseus’s defeat of the gorgon Medusa and his rescue of Andromeda from the sea monster. Burne-Jones is an acquired taste but a must see nonetheless. 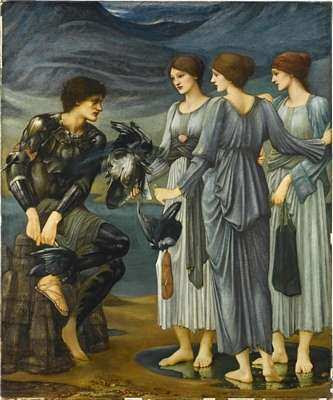 A very interesting twist on displaying popular lively work was to ask various members of Southampton Football Club to pick their favourites. I was particularly taken by  a remake of Ford Madox Brown’s, The Work, chosen by James Searle, the Internal Communications Manager. Painted in almost the same spot in Hampstead by David Redfern in 1977, the machinery is added but all the old favourites are present, the “honest labourer, the idler, the unemployed, those employing mental labour.”

In another Gallery was a special exhibition by George Shaw entitled ‘My Back to Nature” – a pun on his creating the work in the studio. The theme is what happens in the artist’s local woods – a lot of growing up, initiation and a few unsavoury goings on to delight the eye. I first saw  the artists work at the Royal Academy in 2011, and was astonished by the use of ‘Humbrol’ modellers paint in serious art. The subject matter then was derelict scenes on  a Coventry housing estate and the woods of this exhibition are adjoining the estate. This new exhibition, commissioned by the National Gallery is touring the country.

The final gallery was showing the work of Kelly Richardson an advocate for reminding us how far we have gone in the human destruction of the planet. Her ‘Pillars of Dawn’ are digital painted bare monochromatic trees in the unnatural light of dawn – or is it dusk? I have added Orion Tide (2013) on the main banner as an image that particularly took me. The audio visual video presentation showed launching pillars of fire from a desert landscape. Are they rockets, escaping space craft or simply what they appear to be, plumes of flame?

On the doorstep is Sea City with its exhibitions of The Titanic and Southampton Football Club (again) and the John Hansard Gallery with an Artist Room special on Gerard Richter. More of these another time.

My Back to Nature is at the Southampton City Gallery until1st September.

Pillars of Dawn is at the Southampton City Gallery until 6th October.