There are a number of buildings I want to see and last week I ticked off another. Last’s Years French trip saw us at Chartres and this year we visited Rheims with its magnificent Cathedral. It is difficult to say which is your favourite medieval cathedral as they all have their own particular attraction. Notre Dame at Rheims must be very difficult to beat though and we were quite taken aback by the experience. We knew about St Remi baptising Clovis* there in 496 AD. We knew that all but two of the French kings were crowned at Rheims. We knew about the wonderful gothic architecture and the west facade with its statues and the ‘smiling angel of Rheims’. But nothing quite prepared us  for the experience.

What takes your breath away is the twentieth century rôle Rheims has had to play in the reconciliation of Europe. Virtually destroyed in September 1914 and the following four years of shelling, the rebuilding of Rheims represents all that is good with Franco German relations and perhaps fitting that Charles DeGaulle and Chancellor Konrad Adenauer should choose Rheims for the famous reconciliation between France and Germany in 1962 (celebrated fifty years later to the day by Francoise Hollande and Angela Merkel)

But enough of the history; this is an art blog. The architecture of Rheims is highly important in the gothic story and the three portals of the west facade are a stand alone must see of the medieval world. The themes of the life of Mary, the life of Christ, the host of angels, prophets and kings, and the last judgement of Christ are set out in the statuary, but be wary; most of the work is nineteenth and twentieth century restoration.

For me  the glass is the glory of the art. There is much medieval glass here, going back to 1235, again heavily restored, and some wonderful grisaille (plain monochromatic) in the choir but look out for the twentieth century work in the east end. The axial chapel has a terrific display of three windows of Marc Chargall’s church glass, created in the same way as the medieval craftsmen. His themes; The tree of Jesse, Kings and the death and resurrection of Christ, show Chargall’s religious iconography at its finest. It is so encouraging seeing the modern standing shoulder to shoulder with the medieval. There are examples of Rose windows in the French ‘flamboyant’ style in the South, west and north facades. 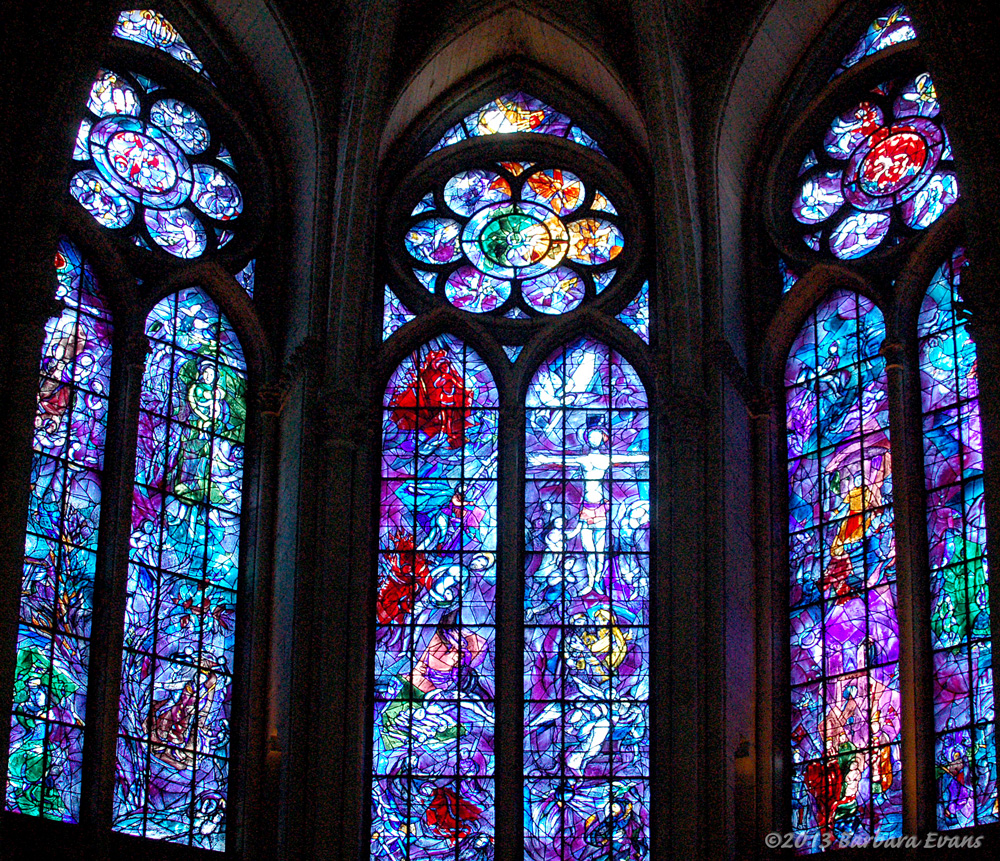 Most emotionally charged though is the work of Imi Knoebel, the German stained glass artist, invited by the French Government to design his six windows in the choir as an act of reconciliation. These abstract windows with strong colours stop you still in your tracks. You move away but then return as your eyes deny your departing. Not always a political animal I would make the observation that to stand inside Rheims Cathedral you realise that Brexit is a shameful disaster unravelling before us, and a failure to read the lessons of history. 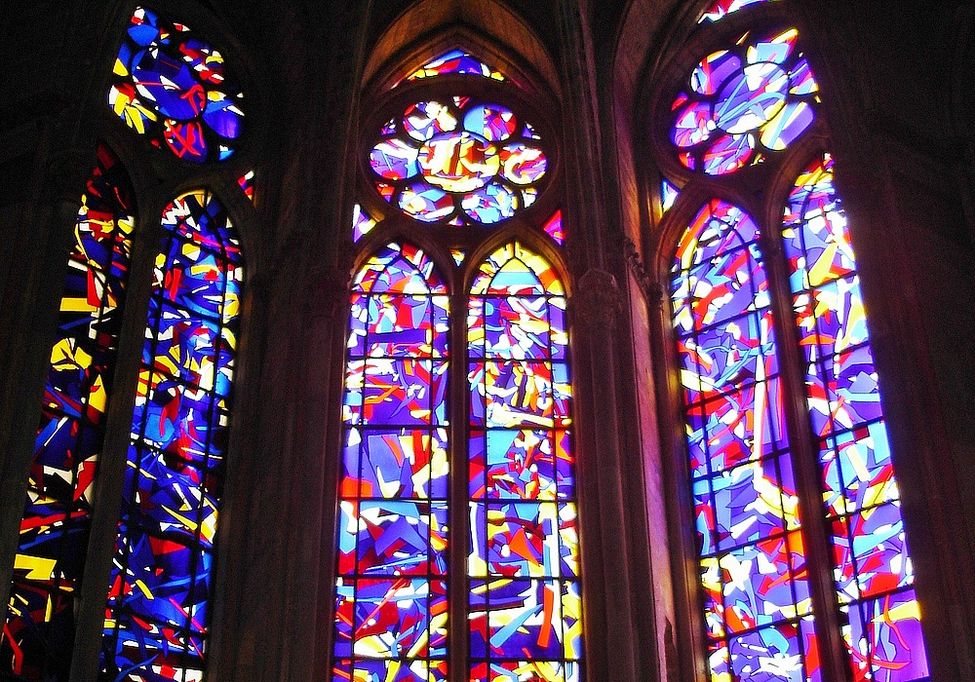 Laon, a few miles north, is much less emotional but still worth a visit. It’s place in history has it as the first truly unified gothic cathedral being built from 1150-1220. The arrival of flying buttresses and barely pointed arches allows so much more light into the Nave and the view from west to east is completely unobstructed. This was also a time the French masons started experimenting with very high vaults. While not the tallest example the openness, permitted by the use of the flying buttresses, allows good visibility especially of the four stories in the Nave. Most English Cathedral’s are built with three. Laon does not shout its praises like other great churches and, interestingly, even the information boards simply emphasise how the cathedral has influenced others (Chartres, Rheims, Strasbourg, Soissons) rather than promoting its own importance. 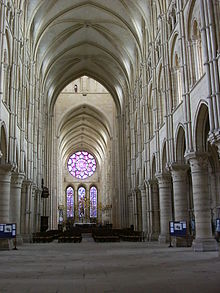 Unobstructed view through Laon Cathedral showing Nave and choir and four levels below the vaults.

Definitely worth a visit but if you want to have your breath taken away – Rheims is the place.

* the early name, Clovis, developed into Louis by the medieval times.