St Tropez never fails to marvel. There are several ways in and road is definitely not one of them though. The views from the water taxi from St Maxime is stunning, with the sun picking out the lovely sandy pinks of the old fishing port. Naples Yellow should have been called St Tropez Yellow as it sums up the colour so well. We visited the Musée De l’Annonciade, primarily to see the work of Paul Signac, who discovered the old port in 1892 and stayed.

Interior of the delightful Musée De l’annonciade, St Tropez, founded in 1922 in an old chapel, with pointillism from Paul Signac and bronze by Aristide Maillol.

One of my essays at Oxford was about The Bathers at Asnieres by Georges Seurat (in The National Gallery) so I was well versed in pointillism and the theory of adjacent colours, and was looking forward to seeing the work of Signac, so inspired by St Tropez. There are more Signac’s  than you can throw a stick at in this delightful ex-chapel including his famous L’Orage, but at the same time a number of other delights. 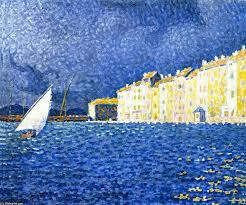 I was taken by the sensual life size bronzes by Aristide Maillol, and other works by other postimpressionists, Bonnard, Vouillard and Matisse, of course, who we missed in Nice. Interestingly, in addition to the French post impressionist works was a large collection of what seemed like seventeenth century Dutch landscapes. All donated or borrowed from the Musée De Beaux Artes, Dunkerque. Why – I have no idea and am still trying to find out.

I suspect the best days of St Tropez are long gone but it is still a good day out and if you do go, search out La Sardine for good value harbourside food and the Annonciade for visual delights. Also look out for the old old harbour to get a flavour of what Paul Signac saw and fell in love with in the 1890s.